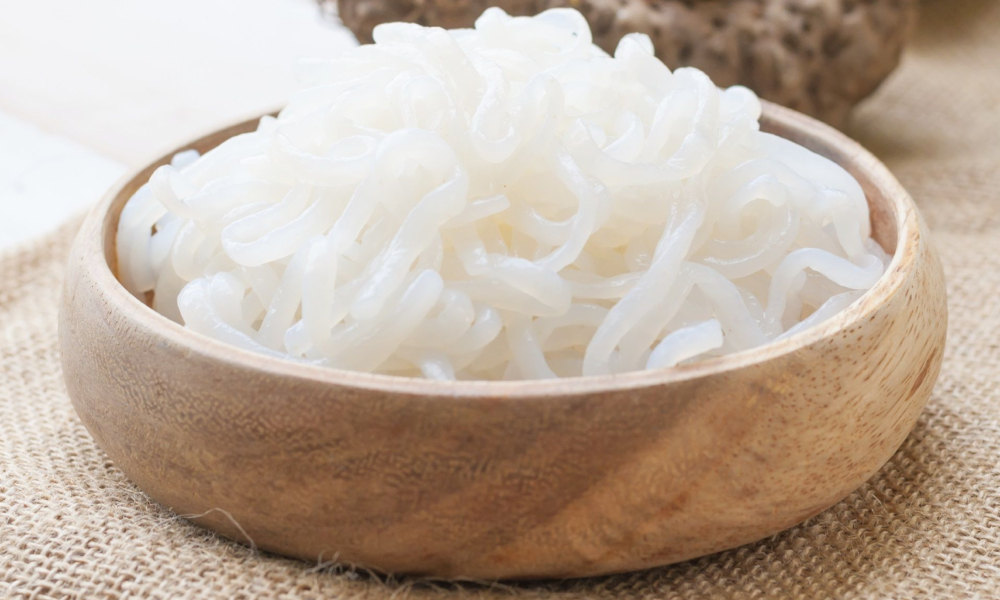 What is satiating, gluten-free, fat-free, virtually carb- and calorie-free, and potentially delicious? Shirataki Noodles! Heard of them?

The thin, translucent, gelatinous Japanese noodles (also called miracle noodles, glucomannan noodles, konjac noodles, or konnyaku noodles) are becoming increasingly popular as a low-carb, ketogenic pasta replacement, so let’s have a look at just what makes them so miraculous.

For starters, they are made from the konjac yam (AKA devil’s tongue yam or elephant yam) that’s native to China’s Yunnan province and cultivated other regions in eastern Asia. They can be purchased wet (soft) or dried at Asian markets and some supermarkets.

Shirataki noodles are composed of 97% water, 3% fiber and traces of protein, fat, and calcium, meaning they have virtually no calories and carbohydrates.

More specifically, there are four calories and roughly only one gram of net carbs in every 100 g / 3.5 oz of shirataki noodles, which is astonishing for a plant-based food. Such a nutritional profile makes them perfect for any diet, especially a low ketogenic diet.

The reason why the packaging may say “zero” calories or “zero carbs” is because, at least in the United States, Canada and elsewhere in the world, products with less than five calories and/or less than 1 gram of carbs, protein and fat are allowed to to be labeled as zero.

Because Shirataki noodles are mostly water and fiber, they leave you feeling more satiated than comparable high-carb, low-fiber foods like pasta and less likely to reach for that bag of chips. Moreover, the noodles provide a unique type of fiber that is rarely found in western diets.

Replacing any high-carb food like pasta and rice with a virtually zero calorie and zero carb food like shirataki noodles could do wonders for your weight and overall health, manly because of the glucomannan they contain.

Studies have found that glucomannan, a soluble fiber that comprises 40% of the dry weight of the konjac plant, has many properties that are conducive to weight-loss and better cardiovascular health. In addition to promoting satiety by keeping you fuller for longer and with less food, it has a number of other benefits:

Shirataki noodles are truly miraculous, and you have little to lose by including them in your diet. However, there are a few potential drawbacks that you should be aware of.

Shirataki noodles have very little micronutrients, and as beneficial as glucomannan may be, it expands rapidly and can absorb up to 50 times its weight in water, so much water, in fact, that emptying a single glucomannan capsule into a small glass of water turn the entire thing into gel. This helps trigger satiety, but it can also cause discomfort.

If glucomannan expands before reaching the stomach, it may cause choking or blockage of the throat and esophagus. But this is an issue that can be prevented by washing it down with 1-2 glasses of water or other liquid.

Glucomannan has also been found to cause bloating, flatulence, and soft stools or diarrhea. It can potentially reduce the bioavailability of oral medications and supplements; if that happens to you, try taking your medication at least 4 hours after or one hour before consuming it.

It is important to note, however, that all of these side effects stem from glucomannan itself and not Shirataki noodles. The fact that the noodles are usually saturated with water and sauce when eaten means you probably won’t experience any of these side-effects.

There has been an outpouring of research showning that Shirataki Noodles are an excellent addition to any weight-loss diet, thanks mostly to the glucomannan they contain. Glucomannan is gluten-free, and as a soluble fiber, absorbs water in the stomach to make you feel fuller for longer.

Glucomannan is an effective weight-loss supplement, and Shirataki Noodles are versatile, keto-friendly and gluten-free alternative to regular noodles, spaghetti and pasta, rice and any other staple rich in carbs, starch and calories. However, as with just about every weight-loss strategy, neither works in isolation. For you to achieve lasting results, you need to make a permanent change to your lifestyle.

Are you up for the challenge?

In this article:Healthy Eating, Noodles