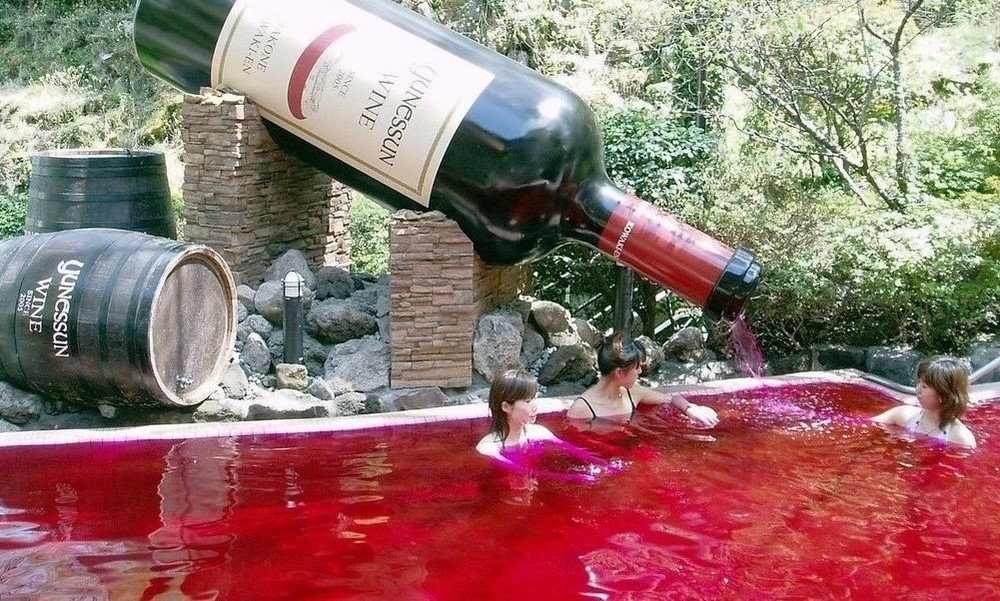 Moderate consumption of red wine has long been known to offer drinkers many health benefits, notably with regards to slowing down the effects of aging and the prevention of colon and breast cancer, dementia and other ailments. Wine also contains numerous antioxidant components that aid in the removal of free radicals from the body.

Now, drinking wine to reap all its glorious benefits is one thing, but who would have thought bathing in wine can also be a good thing? Well, wine bathing could be the latest beauty craze, and the French and Japanese especially have fallen head over heels for it.

As the foundation of Vinotherapy, a beauty therapy process in which the pips and pulp of wine making are rubbed into the skin, wine — particularly the pulp used to make it — is said to have excellent exfoliating qualities and helps reduce the appearance and formation of wrinkles and shift cellulite. It can supposedly even be used as an effective face lift.

The therapy originated in France — by no coincidence home to the first wine spa in the world — and involves being massaged, wrapped, and smothered in the finest wine extracts.

In you’re ever in France and have the money to spend, check out Les Sources de Caudalie in the city of Martillac to see what the fuss about wine bathing is all about. Honey and wine wraps are often offered to patients who want to get rid of cellulites, while those interested in simple relaxation have access to Merlot wraps.

“People are getting bored with traditional treatments using seaweed and mud, so we wanted to come up with something different, we consulted health experts about the possibility of using red wine, and our tests have shown it really can help you shift cellulite and feel invigorated. We don’t just use any old plonk. The wine we use is worth between three and eight pounds a bottle depending on the treatment.”

As beneficial as red grapes and wine might be at helping prevent serious diseases such as cancer, many dermatologists aren’t completely sold on its age-reversing effects. Jan McGregor, consultant dermatologist at the Royal London Hospital, stated:

France aside, Food Beast reports that Japan has its own wine spa in the city of Hakone. Called Hakone Kowakien Yunessun, it features numerous hot pools filled with red wine and water. SPA guests are allowed to drink wine from their choice of glasses or straight from the pool.

Is bathing in wine something you might be interested in? Let us know in the comments below.

In this article:Red Wine, Wine